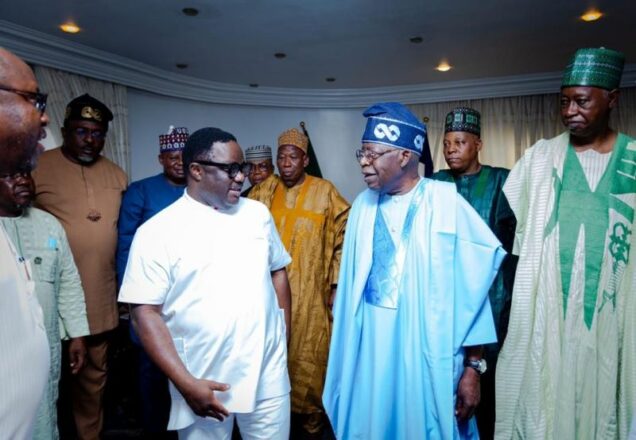 Cross Rivers State Governor, Ben Ayade on Wednesday again canvassed the need for the southern part of the country to produce the next president of Nigeria, saying with the expiration of eight years of President Muhammadu Buhari next year, it is the turn of the South.

He said the idea of zoning came about to ensure an egalitarian and equitable power sharing in the country.

Ayade spoke when the All Progressives Congress National Leader and leading presidential aspirant, Asíwájú Bola Tinubu, paid a courtesy call on him at the Government House, Calabar.

Zoning is a provision of our constitution to ensure balancing. It should not be about ethnic or regional domination, but balancing. It’s the turn of Southern Nigeria in 2023,” he said.

Ayade said the country was in dire need of change and a new way of doing things, arguing that with Nigeria’s potential “as around Number 7 in the world in terms of oil and gas deposit, it is regrettable that the country is still importing petrol to meet its local demand.”

While describing Asiwaju as a trans-generational leader and political strategist, the governor said Asíwájú Tinubu has the capacity, experience and exposure to lead and is more than qualified to be Nigeria’s president.

Ayade said history would be kind to Tinubu as the man who propelled the APC to power in 2015, adding that the APC leader was a cornerstone of the party’s success.

He said he has a long standing excellent relationship with Asíwájú, pointing out that each time he sought his advice on issues, he always got it.

Thank you for your insensitivity to party affiliation, to age difference, to religion and to ethnicity,” he added.

The APC leader had told Governor Ayade who is also contesting for president that there was no collision in their desires. “Mine is to respect you as you respect me.