AN OPINION: ENGINEER OTEGBEYE: GOODNIGHT TO A WORTHY LEADER

ENGINEER OTEGBEYE: GOODNIGHT TO A LEADER, WORTH ITS SALT. 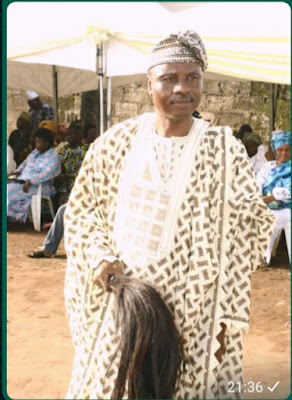 The remains of this gentleman by name, Senior Apostle, Dr., Engineer Benson Akinola Otegbeye were interred in Owo, his hometown last Friday. I understand the event was a solemn atmosphere attended by a few of his numerous beneficiaries of his exemplary leadership. It could not have been better attended given the treatment meted to the deceased in the last few years. The late Engineer Otegbeye was not known to me personally; we had no interaction, communication or dialogue of any kind, direct or indirect. By this clarification, there is no way i could have benefited from him either in cash or in kind.

When individuals succumb to the inevitable icy hands of death and taken out of the land of the living, that's when you get to know them through what people, who knew and had relationship with them say. One gets to hear about all their deeds- the good and the bad. Since fortune took a bad turn for Engineer Otegbeye, not a few have been voicing their pains, concerns and disappointment about the complete and total descent from the mountain top to the lowest depth of the valley that became his lot. In just a few years, he had become a jelly. It got to a point that, nobody, not even his people could stand by him. Surely, baye ba yini lugba mirin omiye a koni, baye ba yini lugba mirin ore a salo jina, a polpular song by the late Isola Adepoju. Meaning: "when fortune takes a bad turn for someone, his mother's children will reject him. When things go very bad, friends will run away." It aptly captures the last years of Engineer Otegbeye.

The system that made him successful, powerful and influential was used to manacle and bring him down. Life is full of vicissitudes, man is always at the receiving end of its topsy-turvy spiralling.

What we heard was a tip when compared to the outpouring of anguish that trailed his demise.

For about two years, that I saw him as a director, the sight of Engineer Otegbeye exuded power in its entirety. The thick and bushy moustache under his clean shaken head distinguished the tall, slim built man  in agbada or dansiki apart from every other civil servant in the Ministry of Works, Oyemekun road, Akure. His gait was akin to that of a high ranking military officer,  as he would swing his hands with every footstep, as if they were his propeller. Engineer Otegbeye was unmistakable. Anytime he opted for suit, he looked trim and smart as if born with it. No wonder, he was a ladies man. The outward disposition did not have any influence on passersby or workers of the Ministry of Lands, which shared the premises with Works. To them, he was just a popular senior officer of his Ministry.

However, Engineer Otegbeye was the Director, Civil Engineering Department (DCE). By virtue of the law, the DCE was the only engineer permitted to speak on engineering matters, the numero uno civil engineer. He was more than and above that position, as he brought class and humanity to it. Engineer Otegbeye was the Commander, leader, boss, benefactor, defender and lover of all the workers, including those centrally deployed to Works. The Civil Engineering department is the core, the heartbeat of the Ministry, though there were others such as mechanical, electrical, planning, monitoring etc.

By virtue of his position as DCE, the Owo-born engineer was a thoroughbred professional, who knew all his officers in the Civil Engineering fully well. He defended them when the need be but never spared the rod. Instances abound that he accompanied Governors to project sites and met shoddy jobs executed by the Ministry engineers. Otegbeye would come to the rescue and claim the job was done according to specification. He would invite the engineer concerned to his office later, tongue lash and post him to another area as a punishment. Such engineer had to go back there and put job back in shape before leaving. That is how a good father treats erring children. He was their father.

A Secretary told the story of how a District Engineer (DE) had to run out of his office bare footed when Otegbeye invited him on phone to come over. Another DE arrived Akure from Ondo within twenty of minutes of being invited on phone. That was the level of respect his subordinates accorded him. He earned it not by virtue of his position but his fatherly leadership role. Aside giving his juniors free hands to operate, he always spurred them to achieve.  Upon being in a District for three to five months, they would be invited and asked, 'where is your parcel of land, where you are erecting your house?' If there is none, you will be ordered to get one asap or get redeployed. And if you have, be rest assured of the deposit of gravel, blocks and other materials in due time.

His boldness stood him out. A political appointee once moved Engineers around without informing the DCE. On getting the paper, Engr. Otegbeye went to him and said, 'Hon. I have gone through the posting you made. However, the postings will not stand because such is my responsibility.' And that put the posting to rest. Unlike the professional politicians we have today, he "lived and allowed others to live." His generosity made him a ladies man. Most ladies would go to any length to attract and date any successful and powerful man. Engineer Otegbeye was no exception.

As the most senior engineer, occupying the most craved position, the DCE did not limit his influence to his department. As the overall boss, other departmental heads were given freedom to operate. There were instances when surbodinates from these departments sought his financial assistance. Engineer Otegbeye would invite the Director and tell him, 'so and so subordinate of yours is in need of ...please assist him.' Within an hour or so, the surbodinate would be invited by his departmental head and settled.

All the management staff of the Ministry of Works, now christened Ministry of Infrastructure passed through his tutelage. I understand most of them in his department erected their first buildings through his prompting and assistance. He did not discriminate against anybody. Either an officer is an Akoko, Owo, Ose, Akure or Ilaje or Ondo man mattered not to him. The late DCE was a christian of the Cherubim and Seraphim extraction. He built a church in Akure here.

When his time as the most powerful civil servant in the Ministry of Works was up, he was uprooted, downgraded and humiliated. There is no need going through what transpired. Engineer Otegbeye was brought down from his exalted mountain top and ridiculed as he was called every ignoble name under the sun. By the time he was forced to retire, he had become a shadow of his old self.

He had been dealt with physically, materially and most unfortunately spiritually. Otegbeye never recovered. At the  onset of his travails following his exit from the system, nobody was ready to associate with him when he visited the ministry. Things went from bad to worse and got to the worst for him. He got to the lowest descent, from which nobody, except whom God helped, recovered. Otegbeye lived the rest of his days as a lonely man and died in loneliness. Man is indeed very small.

This ending, pathetic and unpleasant, must have been precipitated by something: destiny, comeuppance or enemies? Whatever might be the cause, it turned out to be a fate, an undesireable and unenvied one at that.

Goodbye, the Director of Civil Engineering, who brought class to that office.