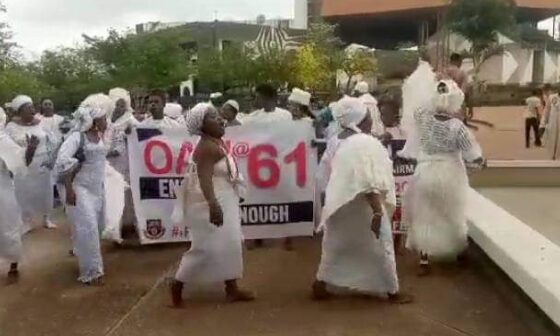 The leadership and the entire members of the Traditional Religion Worshippers Association, State of Osun (TRAWSO), have distanced themselves from the invasion of the campus of Obafemi Awolowo University on Monday.

Some people purporting to be traditionalists, protesting against the appointment of a non-indigene of Ife as Vice-Chancellor of the Institution, had invaded the campus on Monday.

However, a statement signed by Chief Ifasola Onifade Secretary, TRWASO, and Dr. Oluseyi AtandaPresident, TRWASO, said those protesting were not their members.

The statement reads in part: “We were told that those involved were protesting against the appointment of a nonindigene of Ife as Vice-Chancellor of the Institution.

“While we recognize the inalienable right of whoever feels aggrieved to protest of any perceived injustice, we consider it strange that our sacred costumes, paraganglia, and other items (except charms and strange objects as reported) synonymous with traditionalists were adorned by the protesters.

“After thorough checks, we discovered that the protesters were neither members of TRAWSO in our Ile-Ife branch, nor belonged to our other branches around the Ile Ife community.

“As respected members of the traditional institution, we were not involved in the running of the affairs of OAU and we were not involved in the processes that led to the appointment of the new Vice-Chancellor for the University, hence, we have no justifiable reason to protest the appointment of the VC of the Institution, a Federal University for that matter.

“We call on security agencies to investigate and uncover those that dressed like traditionalists and invaded OAU and prosecute those that are found wanting.

“Our members were not involved in the protest. The activities of those involved are self-serving and shameful. The worrisome aspect is the fact that the protesters tended to portray us in a bad light as fetish and uncivilized and we warn against the use of our items by people that are not known to us. Those that are involved should be warned seriously as our members will not take kindly to the repeat of such show of shame which may attract stronger reaction, or even litigation from our end to protect our integrity.

“We also advise whoever wants to express displeasure through protest to take proper channels and desist from the conducts capable of destroying the integrity and honor of others. We want to place it on record that our members did not participate in such despicable acts and we dissociate ourselves from the protest and describe same as inexplicable to use anything belonging to us when in the real sense of it, the cause of the protest has nothing to do with us.

“We believe in fairness and we oppose cutting corners. We did not participate in the protest within the Campus of OAU and we are not in any way displeased with the management of the University regarding the running of the Institution.”