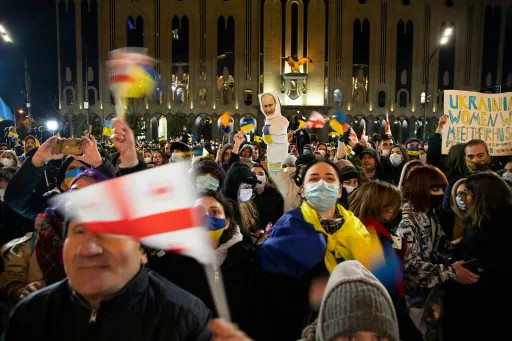 Defiant Ukrainian civilians took the streets on their president’s command Sunday, refusing to capitulate to occupying Russian forces who are now on their 11th day of war amid failed cease-fire talks.

“Ukrainians in all of our cities that the enemy has entered — go on the offensive! You should take to the streets! You should fight!” President Volodymyr Zelensky urged his people.

Residents in the southern Ukrainian city of Kherson, the first to fall to the Russians on March 2, heeded his calls. Waving blue and yellow Ukranian flags in the streets, protesters in the city of  300,000 shouted “go home” to the Russia

In nearby Nova Kakhovka, Russian forces opened fire at the anti-occupation protest of around 2,000 people and injured at least five, according to Interfact Ukraine news agency. The cities of Berdyansk and Melitopol, just north of Crimea, saw demonstrations too.

“It is a special kind of heroism — to protest when your city is occupied,” Zelensky said.

In Mariupol, Ukrainian authorities attempted to evacuate almost half of the port city’s 400,000 residents Sunday under a ceasefire plan that quickly collapsed.

“They’re destroying us,” Mariupol Mayor Vadym Boychenko told Reuters. “They will not even give us an opportunity to count the wounded and the killed because the shelling does not stop.”

Get the latest updates in the Russia-Ukraine conflict with The Post’s live coverage.