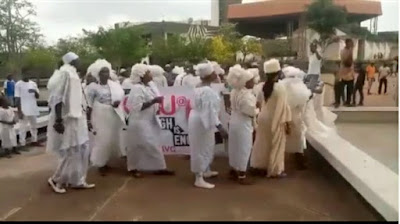 When we talk and act in Nigeria, at times, we turn turn reason upside down. Our ways of doing things are at variance with the norm and methods of enlightened saner societies. From East, West North to South, absurdities reign supreme. Among ourselves and foreigners, we make ourselves look more like jesters, than serious-minded people. We are a people, who savour shirking responsibilities yet using every power and influence to usurp other peoples duties.

I saw the video first on a whattsapp group yesterday afternoon. It comprised of men and women dressed in white, dancing round someone, who held a banner. Everything on them: socks, shoes, mufflers caps and headties was in white. They had white beads on their wrists and ankle as they chanted incantations in their local dialect. The women among them waved their mufflers.

They were fervent. Some people, whom i will call spectators, were standing nearby watching the dramatic scene.

Much later in the night, i got a message that they were protesting. I asked, against who or what? My thinking was, when did university matters became the concern or the responsibility of traditionalists? We are used to students protests (OAU is well- known for this) against the school authorities or government policies considered unfavourable. But spiritual people, who are reputed for speaking with gods and deities, coming out in the open daylight in protest. It has never happened. To put it in another form, i have never heard it.

In the morning, i read that the appointment of a new Vice Chancellor for the institution miffed them to do the procession. Their display was the climax of a protest, which began on Thursday following the appointment of Professor of Agriculture Economics Adebayo Simeon Bamire as the 12th Vice Chancellor of OAU by the peole of Ife. The brains behind the protests must have been persuaded to think that the dread people have for traditional religion would make the Giverning Council have a rethink. Please and please, i will like to be better informed about that show of shame by the men and women, who are supposed to defend and uphold traditional values in an institution of learning. Were they saying they should have been invited or çonsulted to have a say in who becomes the VC? Maybe, they should have been given the right and power to choose the VC. Let me take it further.

Were they saying the University governing body picked an individual that is not part of it? Is the man lacking the necessary prerequisite such as certificates, experience and exposure? Or he is a non-Nigerian? Unfortunately, these people did not issue any statement for the press to let the world know the basis of their grievance.

It would not be out of place to suggest that these men and women in white were showing their displeasure to defend one of their own- a member or a member's son/daughter. On the other hand, they might have gone to the campus to fulfil their part of a deal. Help me to get my heart desire and i will do this/these. Rub my back and i rub yours, sort of. Nigerians are famous for this.

Now to the real issue, Professor Bamire defeated 19, yes, 19 other applicants to get the job. He had been HOD, Dean having rose through the ranks. Until his appointment, he was the deputy Vice Chancellor Academics. In terms of qualification and experience, he is eminently qualified.

At a Press briefing, Pro-chancellor and Chairman of the Governing Council of OAU, Chief Oscar Udoji relayed the process through which the new VC emerged. Hear him:

"The new Vice-Chancellor is expected to assume duties on 7th June, 2022. In line with approval of the Council, the vacancy was widely advertised in compliance with relevant Statutes and Acts guiding appointment to the position.

“At a special meeting of 14th February, 2022, the council perused the Curriculum Vitae of all the 20 applicants who indicated interest in the position. At the end of the exercise, 16 of them were shortlisted, having met the advertised criteria.

“The interaction with the candidates began on Monday, 14th March, 2022 and ended on Wednesday, 16th March, 2022. All the 16 candidates appeared before the Joint Council and Senate Selection Board, with 15 of them present physically and one, at his request, virtually

"The Selection Board painstakingly examined the Curriculum Vitae and interacted with each candidate, and scored them accordingly to stipulated criteria. The three highest scoring candidates were presented to the Council for further consideration as provided by the law.”

“In line with the provisions of the Universities (Miscellaneous Provisions) (Amendment) Act as amended, the report of the Selection Board was considered by the Council which, after a careful and dispassionate review of the report, decided to appoint Professor Adebayo Simeon Bamire, Professor of Agricultural Economics from the Faculty of Agriculture, Obafemi Awolowo University, Ile-Ife, as the Vice Chancellor of the university with effect from June 7, 2022.”

The man in question, Professor Bamire is an indigene of Oyan in the same Osun State, which Ife belongs to. And Ife, the purported source of all Yoruba people is now condescending so low and myopic to tell the world that other Yorubas are inferior to them. When did ownership of a federal University became a town's responsibility? Have they forgotten that OAU has always and will continue to be government-owned?

And for the traditionalists, they ventured into an area beyond their jurisdiction. They want to use their weakened and subjugated power to get their son, the VC through the back door. When traditional institutions or organisations start overstepping their bounds, they attract insult and lose their respect. Their brothers and colleagues in Ogun State recently protested the overbearing interference of government in the choice of traditional rulers. They were in order. Now, relate, compare and contrast that to the flagrance muscle-flexing of their counterparts in Ife. Government merely gives its nod to who ever they choose. Even the Ifa of no longer respect merit but money. Everyone has his role defined.

I am sure many of Ife people are happy that their offsprings and relatives are in positions of authority by merit in other states and outside Nigeria.

They are now denying another man a position he attained by dint of hardwork and professionalism what their people are enjoying elsewhere. That is double standard.

On a final note, let these traditionalists go and check history to ascertain this: traditional people have never won any battle against the government. They are always beaten and subdued. After, they get caged and rendered impotent. The law of the land does not favour tradition; the system does not recognise it and the leaders know how to circumvent it, using their members. I am Yoruba and i respect tradition, though i am not a traditionalist in anyway.

On this, the Ife traditionalists, who distrupted the peace and trasquility of Ife yesterday were not justified in their action. They overstepped their bounds.