Photo journalist is missing near Kyiv 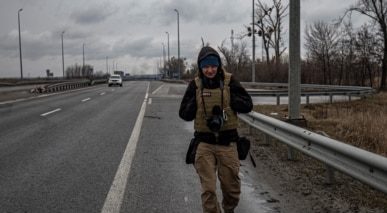 A renowned photojournalist, Maks Levin, who reported from the frontline, has disappeared near Kyiv.

The journalist went by his own car to photograph Ukrainian combat operations on March 13, 2022.

He left his car near Huta Mezhyhirska village and headed towards Moshchun village. The last message from his phone was received at 11:23 a.m. Since then, he was not online and could not be contacted.

‘The front line in the north of Kyiv runs along the line of defense of Kyiv during World War II. Places where the Ukrainian army now stands, there are bunkers of the Soviet army during Kyiv defence in 1941. On other side of the river Irpin stood the troops of Nazi Germany. Now – russian army. Ukrainian forces near destroyed bunker of WWW II, not far from Demydiv, Kyiv region, 11 March 2022.’

As stated before, the area where the journalist was supposed to work, a heavy fighting had begun.