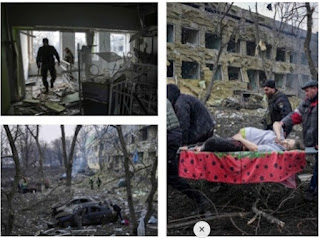 Russian forces bombed a maternity and children's hospital in southern Ukraine, authorities there said Wednesday, an attack described by the country's President Volodymyr Zelensky as an "atrocity

The attack came despite Russia agreeing to a 12-hour pause in hostilities to allow refugees to evacuate a number of towns and cities.
Mariupol city council posted a video of the devastated hospital in the city and accused Russian forces of dropping several bombs on it from the air.
"The destruction is enormous," said the council. "The building of the medical facility where the children were treated recently is completely destroyed."
Police in the Donetsk region said that according to preliminary information at least 17 people were injured, including mothers and staff, as a result of the attack.
Zelensky repeated his call for the NATO military alliance to declare a no-fly zone over Ukraine, as he expressed his outrage at the attack.
"Close the sky right now! Stop the killings! You have power but you seem to be losing humanity," he said on Telegram.
"Direct strike of Russian troops at the maternity hospital," Zelensky said, adding, "People, children are under the wreckage. Atrocity! How much longer will the world be an accomplice ignoring terror?"
Later Wednesday, Zelensky called the strike "final proof, proof of a genocide of Ukrainians taking place." 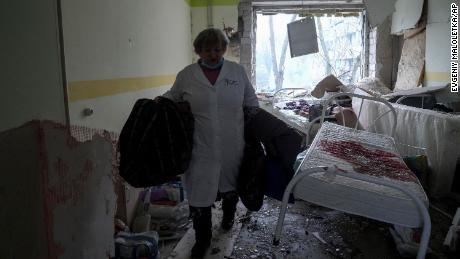 A medical worker walks inside the damaged hospital.
Russian Foreign Ministry spokeswoman Maria Zakharova claimed, without providing evidence, that Ukrainian forces had "equipped combat positions" within the hospital. Video from the hospital after the bombing clearly showed there were both patients and staff there, including heavily pregnant women who were carried from the hospital.
The hospital attack received international condemnation, with the United Nations saying it would follow up "urgently" on the "shocking reports," and that healthcare facilities hospitals and health care workers should not "ever, ever be a target."
A city administration building and a university in Mariupol, less than a kilometer from the bombed-out hospital, has been identified by CNN as a second location in the city hit by an apparent Russian military strike.
Images on social media show significant destruction at the University and City Council Building.
The strategic port city of Mariupol on Ukraine's southeast coast has been under siege for days and has been "isolated" by Russian forces, a senior US defense official said Tuesday.
Russia continues to bombard Mariupol and its troops are not inside the city "in any significant way," added the official. Two officials said Wednesday that about 1,300 civilians there have been killed since the Russian invasion began.
Residents have been cut off from water and electricity for days, and on Tuesday Ukrainian Foreign Minister Dmytro Kuleba accused Russia of committing war crimes by holding 300,000 civilians "hostage."
"The situation in Mariupol is desperate," Mirella Hodeib, spokesperson for the International Committee of the Red Cross (ICRC), said on Monday.