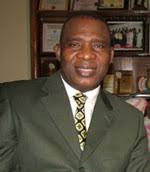 Are you wondering, who Dr. Sunny Obazu-Ojeagbase is? The simple response is, if you have seen or read Sports Souvenir, Complete Sports, Complete Football, Soccer International or Success Digest, there you have the stamp and authority of the journalism and publisher personified, Dr. Sunny Obazu-Ojeagbase jnr. One somehow finds it cumbersome to find the right word that can summarise and encompass this icon of a man. To label him a man of many parts will not be an understatement. He was a soldier, a basketball player, turned reporter, editor, publisher, enterpreneur and author as well as a philanthropist. He is also a Pastor.

One often finds it somewhat difficult to put  pen on paper when you want to write about certain individuals. Such people include those whom one considers, a mentor, from whom one has learnt an art and a craft. I do not know maybe i would not have known how to write if i had not "met" Dr. Sunny  Obazu-Ojeagbase.

One of the habits introvert develop naturally is an avenue to express himself. We do not have a luxury of many openings to do so. Extroverts are at home everywhere: they are good mixers; they find it easy to ingratiate themselves with everyone, everywhere and everytime, wherever they find themselves. For introverts, its not so.

When i was introduced to newspaper in my teenage years, the National Concord was the most circulating daily in the country. It was selling hundreds of thousands copies daily. With the flamboyant and lively Dele Giwa, Ray Ekpu and Yakubu Mohammed running the show, the newspaper was the favourite of news lovers. Somehow, i found the Sports pages  most interesting. I used to see articles of the three musketeers mentioned above on page three, i never read them. The Sunday Concord was my favourite with Sunny Ojeagbase menu covering snippets, stories, letters and others on Sports. We used to have five pages of full throttle sporting stories particularly on the round leather game, called football.

When The Guardian was established, Dr. Sunny Ojeagbase was the Sports Editor. He brought his ingenuity into play this time with inimitable and irresistible reporting of happenstances of football matches. The paper woulda devote half, full page to a match. I relished it as i became a regular consumer of such reports. S.O as he was foundly called, brought on board Mitchel Obi, Sam John, Joseph Okujeni and a few other guys who wrote English in a manner the Englishman envied. Together they took sports writing to a new height with flowery, prose and enlightening pullout via articles, reports and gossips. I was consuming their reports, opinions and gossips with passion. I have to confess it that football news generally overtook my school work at this time. I knew all the football clubs, their players, coaches and virtually everything about them courtesy of my interaction with the Sports news and commentary of late inimitable, Ernest Okonkwo. Then, the local league was the king.

However, Dr. Sunny Ojeagbase left the guardian for the unpredictable publishing world by establishing Sports Sovenir in 1985. He started the business with about N6,000.00, after sellin  the photo camera he bought at the 1984 Olympics.  It was the pioneer specialised newspaper in Nigeria, with focus on football. A few years later, he expanded the newspaper horizon with the introduction of International soccer magazine (hope i got the name right).

He changed the newspaper's name to Complete Football and eventually, Complete Sports. These are daily publications.

These achievements are nothing when compared to what Dr. Sunny Ojeagbase attained through Success Attitude Development Centre (SADC). The NGO was publishing Success Digest magazine on a monthly basis with business opportunities stories, inspirational breakthroughs and seminars. He used this platform to open the eyes of numerous Nigerians to  opportunities and riches awash  on the internet. Using his journalism skills, he wrote extensively about business opportunities in all sectors of the economy. He employed young and good writers, who dish out articles, interviews and ideas that were opening the eyes of understanding of the people. I remember a pullout he delivered on opportunities in the Nigerian movie industry, before the coinage Nollywood came into being. Mention the area or sector of the economy, SO's Success Digest must have written on it.

Through lectures organized under the auspices of SADC, he opened the avenues of success on the internet. The CEO of NAIRABET and a member of the House of Representatives, Akin Alabi is one of his numerous products. Others include Nnamdi Azimora, Dr. Efe Imiren, Toye Oyeleke, Fisayo Akunlolu and a host of others. They are all graduates of the the first ever Internet Summit in Nigeria, tagged, Internet Boot camp and later, Demystyfying The Internet. Here, interested individuals were taken through the rudiments of internet. Some of the courses include, blogging, affiliate marketing, webdesign, content writing etc.

In 2009 or 2010, this enigma gathered over 200 youths together, housed and fed them for one week, teaching them internet opportunities. That programme dipped a big whole of over five million (N5m) in his pocket. Many of the beneficiaries of this gesture are owners of their own business across the country today.

These achievements might sound hollow unless i shed some light on ceretain circumstances about his (atapata dide) rags to riches history. Before 20, he was a mechanic apprentice, learnt stenography for about five months, before joining the Nigerian Army to be free from poverty. He had to leave the Nigerian Army, when he was neckdeep in debt, as a result of gambling. He took to gambling to get rich but ended up in mountain of debt. A small book titled, the 7 LAWS OF SUCCESS, changed his perspective and caused him to jettison his military career. SO then acquired a certificate from the London Institute of Journalism correspondence course. That was what he used to get his first paid job with the Daily Times. I did not know him, then. In 1981, he obtained a Diploma in Mass Communication from the University of Lagos.

His decision to quit his high flying position as the Guardian Sports Editor was to better his lot and provide for his large family as his salary (his salary was ten thousand naira (N10,000.00 per anum) was grossly inadequate. When this publication berthed, it took SO a lot of courage to see it succeed, as he a former editor was the vendor selling at the National Stadium. He had been influenced by the contents of that all-time classic, Think And Grow Rich by Napoleon Hill. His peregrination as a reporter and editor through Daily Times, National Concord to The Rutam House of The Guardian lasted seven years (1978-1985). Upon publishing Sports newspaper and magazine for about fourteen years, his tireless adventurism desired a new challenge. That was the precursor to the Success Atttitude Develooment Centre (SADC), a NonGovernmental Organisation which he co-founded with his suportive wife. Dr. Sunny's success by any standard had his thirst for improvement as a yardstick.

The first internet summit held in Nigeria was organised by him in 1999. It was tagged, Internet Bootcamp. He had travelled to the United States, where he came across a book, titled, How To Make Money On The Internet. For someone, who had just set up an NGO, with intent on teaching people how to make money, better their lives and become employers of labour, he had to buy it. He could not put the down as he got engrossed on the contents throughout his return trip to Nigeria. On arrival, he gave a standing order to his Secretary, 'i dont want to see anyone except my family members for the next three months.' The ideas he imbibed from the book gave birth to that bootcamp. This man is so vast in inspirational and business ideas that your meeting will him will tinker your thought and leave you with the conviction that you can succeed, the odds notwithstanding. Through his books (at least four at the last count) you are taking through insights into what you need do get the better out of yiur life, business and family. Everything he has become in life came via consumption of books.

Anyway you look at it, Dr. Sunny Obazu-Ojeagbase is a rare breed, a gem, an enigma and a collosus. In a country, where leadership has gone to bed and emphasis is placed on inconsequentials, one cannot be wrong to shout the name of this man on the maintain top. Complete Sports and SADC employ hundreds of people. I heard this story when i attended DTI4. His former employee, who has become a partner in Complete Communications, Dr. Mumuni Alao said some contemporaries of Dr Ojeagbase always visit the Sports Ministers office to see him for one favour or another. And SO replied that he had never tabled a bid for or taken a contract in his life. He added, "i have never been to the Minister's for anything. Complete Sports pay the stipulated fees to government for coverage of events."

Dr. Sunny Obazu-Ojeagbase is self-made, (he would not agree with that), God-made man, who through the dint of hardwork has become an Iroko tree. The tree has many branches, serving as a shed and shelter for many others. Your life is a blessing.