January 13, 2017
Online retail store giants, Amazon new warehouse in Baltimore is a rare economic bright spot there, employing 3,000 people full-time in a city ravaged by poverty and a lack of opportunities for less educated workers.

And with Amazon’s announcement Thursday that it plans to hire 100,000 new employees in the next 18 months, the Baltimore facility and at least 70 other Amazon fulfillment centers across the country stand to be among the biggest beneficiaries. 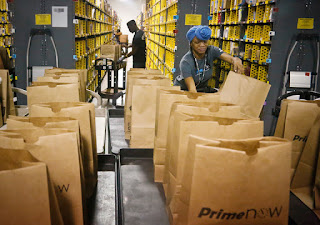 Fifteen miles away in the suburbs, all that is left of Owings Mills Mall is rubble, demolition having started in the fall, after the last anchor stores, Macy’s and J. C. Penney, closed within months of each other.
The contrast between the two scenes is an example of what the economist Joseph Schumpeter termed “creative destruction,” the inevitable process in which new industries rise and replace old ones.
But creation tends to get more press than destruction, and the announcement from Amazon is no exception.
The company’s hiring plans are certainly good news. But to understand the forces roiling the American economy, it’s key to remember that online retailing has destroyed many times that number of positions at malls and shopping centers across America.
That’s not necessarily a bad thing over the long term. Greater productivity is essential for economic growth, and, according to the company, the 100,000 figure includes highly paid engineers and software developers in addition to hourly warehouse workers. But for people caught on the wrong side of that transition in the short term, it’s the equivalent of an economic hurricane.
“There are huge benefits to consumers from Amazon,” said Lawrence Katz, an economics professor at Harvard who studies labor and technological change. “But the workers they are hiring aren’t the same ones being laid off.”
Even since New Year’s Day, the traditional retail sector has absorbed more blows. Macy’s said last week that it would eliminate 10,000 positions, and the Limited announced this week that it would close all 250 of its stores, eliminating 4,000 jobs.