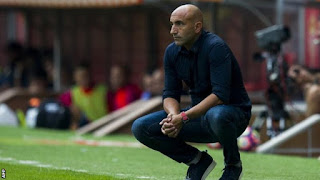 Abelardo has left his role as Sporting Gijon head coach, but refused a reported four million euros (£3.5m) in compensation.
Gijon are 18th in La Liga, after losing seven of their last eight league games.
Abelardo, 46, a Gijon native, played for the club for five years and took over as head coach in 2014.
"I don't have a problem writing off the money," said Abelardo. "There are more important things - loyalty to my club above all."
The ex-Spain and Barcelona defender, who was in tears during the news conference, will be replaced by former Girona, Valladolid and Levante coach Rubi.