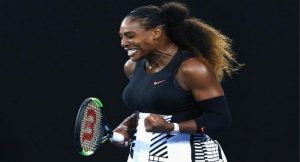 The 35-year-old won 6-4 6-4 to pass Steffi Graf in the all-time list of major winners since the grand slam accepted professional players in 1968.
The second seed overcame a stuttering serve to take a Topsy turvy opening set and one break of 36-year-old Venus’s serve proved enough to claim the second after 82 minutes on Rod Laver Arena.

Australia’s Margaret Court is the only player still ahead of Serena in terms of grand slam singles titles on 24.
The American regains the number one ranking from German Angelique Kerber.