Eight billionaires 'as rich as world's poorest half' 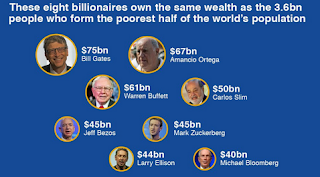 The world's eight richest individuals have as much wealth as the 3.6bn people who make up the poorest half of the world, according to Oxfam.
The charity said its figures, which critics have queried, came from improved data, and the gap between rich and poor was "far greater than feared".
The richest eight include Bill Gates, Mark Zuckerberg and Warren Buffett.
Mark Littlewood, of the Institute of Economic Affairs, said Oxfam should focus instead on ways to boost growth.
"As an 'anti-poverty' charity, Oxfam seems to be strangely preoccupied with the rich," said the director-general of the free market think tank.
For those concerned with "eradicating absolute poverty completely", the focus should be on measures that encourage economic growth, he added.
Ben Southwood, head of research at the Adam Smith Institute, said it was not the wealth of the world's rich that mattered, but the welfare of the world's poor, which was improving every year.
"Each year we are misled by Oxfam's wealth statistics. The data is fine - it comes from Credit Suisse - but the interpretation is not."