January 27, 2017
Venus and Serena Williams will tomorrow meet in a Grand Slam final for the ninth time after the American sisters came through their semi-finals at the ongoing Australian Open 2017 in Melbourne. 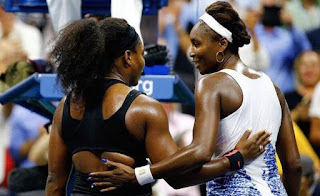 Thirteenth seed Venus, 36, beat fellow American Coco Vandeweghe 6-7 (3-7) 6-2 6-3 to reach her first major final since 2009.
World number two Serena, 35, saw off unseeded Croat Mirjana Lucic-Baroni 6-2 6-1 in the second semi-final.
Serena is attempting to win an Open-era record 23rd Grand Slam singles title
It would also be a seventh Australian Open victory for the younger Williams sister, while Venus hopes to win an eighth major title, first in Melbourne and first since Wimbledon in 2008.
Tomorrow will be their first Grand Slam final against each other since Wimbledon 2009 when Serena won in straight sets
It is unbelievable to watch Serena play tennis – the way she hits the ball and the competitor she is,” Venus Williams said after the first semi-final
“It would be a dream to see her on the opposite side of the net on Saturday.”
Speaking after her win, Serena said: “I am really proud of Venus – she is a total inspiration. I am really happy for her and to be in the final together is a dream for us.
“She is my toughest opponent, no-one has ever beaten me as much as Venus.
“I feel no matter what that we have both won after all we have been through. I know a Williams is going to win this tournament.”
Vandeweghe, 25, had played superbly in seeing off world number one Angelique Kerber and French Open champion Garbine Muguruza to reach the last four, but she could not maintain that level in the semi-final.