January 13, 2017
World Club and European champions, Real Madrid Football Club have set a new unbeaten record in Spain. The club's 3-3 Copa Del Ray draw against Sevilla yesterday was the fortieth (40) match the Zinedine Zidane tutored squad have played without a loss.
Barcelona held the previous record of 39 games, set under manager Luis Enrique between 2015 and 2016. 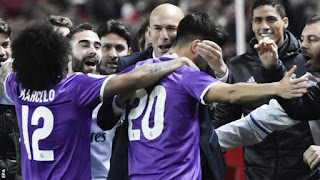 Thursday's draw means Real progress to the Copa del Rey quarter-finals as 6-3 winners on aggregate.
Former Juventus, Real and France midfielder Zidane, 44, was appointed in January 2016 after two years managing their reserve team.
He has since won more titles than he has lost matches - winning the Champions League, the Club World Cup and the Uefa Super Cup, while suffering only two defeats.
Real have won 31 and drawn nine matches since their last defeat, scoring 115 goals and conceding 39.What feat! Congratulations!