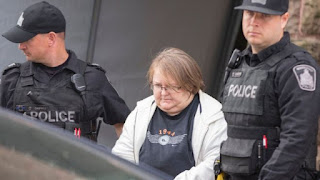 Ontario Police Provincial charged Elizabeth Wettlauffer with four counts of attempted murder and two counts of aggravated assault.
Ms Wettlauffer already faces first-degree murder charges for patients under her care in two southwestern Ontario nursing homes.
The new offences alleged took place between 2007 and 2016.
Police say the latest charges involve four residents of Caressant Care in the town of Woodstock, one resident of Telfer Place in nearby Paris, and one resident who lived in a private residence in Oxford County, Ontario.
Four of the six victims have since died, though police did not link Ms Wettlauffer to their deaths.
In a statement, Revera Living, which owns Telfer Place, said the case had been "disturbing and heart-breaking" but that the elderly resident involved in the alleged September 2015 assault "is doing well".
A Caressant Care Woodstock representative said the care home continues to co-operate fully with the police investigation.
Last fall, the former nurse was charged by police in the deaths of seniors between 75 and 96 years old.
Police said seven of the victims were given a fatal dose of a drug.
The victims were five women and three men and were all residents of Caressant Care and Meadow Park in London, Ontario.
Sandra Zisckind, a lawyer representing two of the victims' families, said on Friday that they plan to file a civil lawsuit against the care homes involved.
The 49-year-old made her first in-person court appearance in Woodstock, Ontario on Friday to answer the new charges.
Ms Wettlauffer registered as a nurse in June 1995 but resigned on 30 September 2016, shortly before police announced the charges against her.
Police identified the murder victims as: